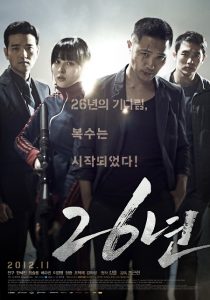 26 years ago, state troops were ordered to open fire on civilians in the city of Gwangju who were demonstrating as apart of a democratic movement. Thousands of civilians were killed.

Now, a shooter from the national team, a gang member, a policeman, CEO from a large company and director of a private security outfit get involved in a plan to convict the person responsible for the massacre that occurred during the Gwangju Democratization Movement.

Kwak Jin-Bae (Jin Goo) is a gang member who lost his father in the Gwangju Democratization Movement. He wants to get revenge. Shim Mi-Jin (Han Hye-Jin) is a shooter from the national team. She is the shooter for the covert team. Policeman Kwon Jung-Kyuk (Im Seul-Ong) lost his family in the Gwangju Democratization Movement. He is now responsible for the cars that have access to the ex-president’s house.