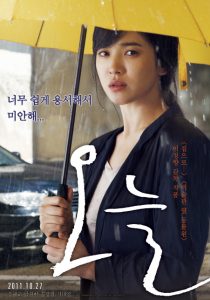 TV producer Da-Hye (Song Hye-Kyo) lived through a miserable childhood. Her parents fought all the time and finally divorced. Da-Hye then found her prince charming and was engaged to marry him. Then on a rainy night, the day before her birthday, Da-Hye’s friend Ji-Suk (Song Chang-Ui) calls and asks for a ride from her fiance (Ki Tae-Young). When her fiance arrives, he finds out that Ji-Suk has already gotten a ride from his sister Ji-Min (Nam Ji-Hyun). As Da-Hye’s fiance walks back to his car he is hit by a motorcycle. The driver of the motorcycle then turns around and fatally runs over her fiance.

One year later, Da-Hye has forgiven the teenager who killed her fiance. She believes that he still has a chance to turn his life around and it’s better to just move on. Da-Hye has quit her TV job and is now working on a documentary about forgiveness requested by the Catholic Church.

Meanwhile, Ji-Suk’s younger sister Ji-Min comes over to Da-Hye’s apartment and stays there indefinitely. Ji-Min complains that her father, a respected judge, is physically abusive towards her. Da-Hye believing Ji-Min is exaggerating asks her to be nicer to her parents. Ji-Min helps Da-Hye as she goes to interview various family members of murdered crime victims. During these interviews, Da-Hye thinks back to the teenager who killed her fiance and starts to have doubts on whether she should have forgiven the boy so easily. Da-Hye burdened with this doubt seeks out the boy to see how he is now living …