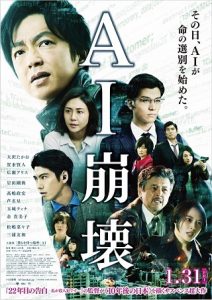 In 2030, AI is everywhere including the medical field, finance, and security. Artificial intelligence has become essential in people’s lives. People have come to completely trust AI, but an artificial intelligence system suddenly spirals out of control. Kosuke Kiryu’s (Takao Osawa) NOZOMI system begins to go amok. He created the medical AI system to help people, but the system is now determined to weed out those that it determines are not fit to live anymore and kill them in mass. Kosuke Kiryu must stop his creation before the killing begins.