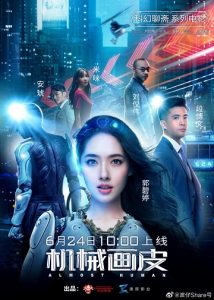 Science Madman has privately developed a highly developed humanoid robot with sympathetic nerves to satisfy his own desires. Unexpectedly, the robot developed its autonomous consciousness. It exchanged the skin of the beautiful woman Su Xin through “Black Technology” and lurked beside Su Xin’s boyfriend Wang Sheng. On the other side, the bizarre serial murder case has attracted the attention of police officer Li Dongbin, and the danger is quietly brewing. “Mechanically Painted Skin” is a science fiction love film directed by Zhang Nan, starring Guo Biting and Duan Bowen, starring Liu Yiwei, Mimi, Ma Yujie, Nie Mei, and starring An Hu. The film is based on the chapter of “Painted Skin” in the classic Chinese classic “Liao Zhai”. It describes a scientific madman who developed a humanoid AI with sympathetic nerves. When AI germinates its autonomous consciousness, it hunts the beautiful women for skin removal. The story that took their place and lurked around their boyfriend.