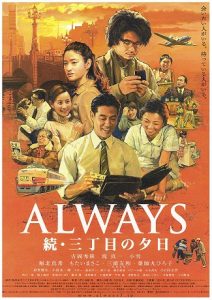 4 months after the prequel. Spring, 1959. The Olympics in Tokyo has officially been announced, and Japan is about to take its first step into the period of high economic growth. Still unable to forget Hiromi, who had left without a word, Chagawa has been living with Junnosuke. One day, Kawabuchi returns to take Junnosuke away. Chagawa is given permission to take care of Junnosuke on the condition that the child enjoys an ordinary standard of living, so to obtain a decent living and to show Hiromi that he has become a better man, Chagawa begins to write a literary piece to win the Akutagawa Prize, a dream that he had given up long ago.

Meanwhile, at Suzuki Auto, Mutsuko has learned her job and the company has been growing steadily. One day, a new member joins the Suzuki family. Because a relative of Norifumi’s had gone bankrupt, the Suzukis agree to take in the relative’s daughter, Mika. Norifumi’s son, Ippei, is against the idea, but Norifumi, his wife Tomoe and Mutsuko welcome Mika warmly. However, Mika, who had been brought up in comfortable circumstances, is bewildered by her new life without a maid.

Also, the familiar faces such as Dr. Takuma and Kin at the tobacco store are still around, joined by new members such as Mutsuko’s childhood friend Takeo Nakayama and others, and it appears that the Third Street neighborhood is still bustling with warm-hearted exchange and lively activity. (AsianWiki)