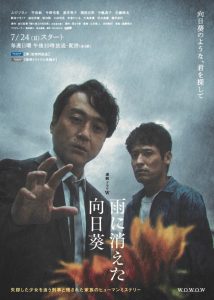 
On a rainy day, 5th grade elementary school student Aoi Ishioka goes missing. She left behind an umbrella on a road next to a rice paddy where sunflowers bloom. Kenichi Nara (Tsuyoshi Muro) is a detective in Saitama Prefecture. He hears about Aoi Ishioka’s missing person case and goes to the place where she was last placed. There, he sees Aoi Ishioka’s father looking for his daughter and other people. Aoi Ishioka’s parents are in the process of divorcing and Aoi Ishioka lived with her mother. Police are not sure whether her disappearance is kidnapping, some kind of accident, or a runaway case.

Kenichi Nara continues to investigate Aoi Ishioka’s missing person case as best as he can and he uncovers the truth of her disappearance.