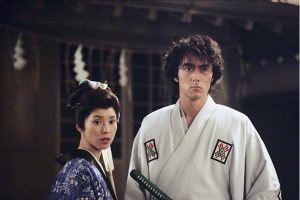 Yajuro is a modern man who suddenly slipped back in time from the present age to the Edo era due to an unexpected accident. However, he lost all memory of the present times. Okinu (Hitomi Kuroki), a female bandit, finds a handsome man (Hiroshi Abe) who has fallen naked beside a huge stone monument and takes him back to her rowhouse. She names him “Ishibumi Yajuro” (“ishibumi” is a historical or memorial stone monument). He had lost all memory of his birth and name, but retains his character from 160 years later in the Heisei era. He has a certain skill with the sword, is kind to humanity, and has a sense of justice. With Okinu and the members of Tenpou Rokkasen, he confronts the evil of Edo.