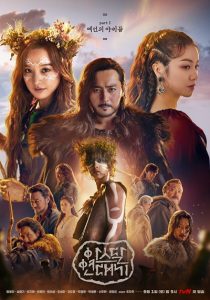 Set in the fictional land of Arthdal during ancient times.

Eun-Sum (Song Joong-Ki) was born with a fate to bring disaster to Arthdal. Due to his mother’s struggles to save him, he goes through hardships and grows up. He appears again in Arthdal.

Ta-Gon (Jang Dong-Gun) is a war hero of Arthdal. He has paved the way for Arthdal to become a prosperous city nation and he is the most powerful person in Arthdal. He dreams of becoming the first king of Arthdal.

Tan-Ya (Kim Ji-Won) was born with the same fate as Eun-Sum. She is the successor of the Wahan Tribe. Going through hardships, she realized her mission. She lives under the highest honor and her ambition is to become a politician.