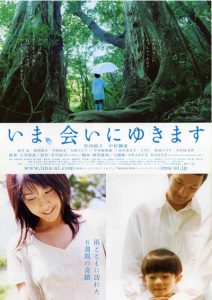 When two souls find one another, nothing can tear them apart. Widower Takumi (Shido Nakamura) lives a quiet life with his six-year-old son Yuji (Akashi Takei) after the loss of wife and mother Mio (Yuko Takeuchi). Yuji unfailingly remembers her promise to him: “I’ll be with you again in a year’s time, when the rains come.” On the first anniversary of her passing, Takumi and Yuji are taking a walk in the woods when they come across a woman sheltering from a monsoon downpour. She bears an uncanny resemblance to Mio, but has no recollection of who she is or what she is doing there. Family life resumes from where they left off, while Takumi and Mio’s memories of their first encounter in high school come flooding back. However, their new life together is interrupted by the discovery of Mio’s old diary, which reveals the secrets of her past and how they must say goodbye once more in six weeks time…