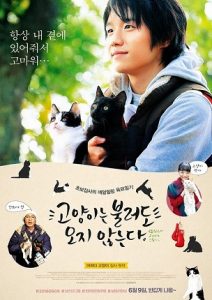 Mitsuo, a boxer on the verge of turning 30, has dedicated his life to the sport. He needs only one more victory before he can start taking on the world. Everything changes when he meets two kittens: Blackie, a male, and Petty, a female. They have been taken in off the street by his older brother, a manga creator who lets him stay at his apartment free of charge. While his elder sibling struggles to meet an impending deadline, Mitsuo finds himself with no other choice but to look after the cats.