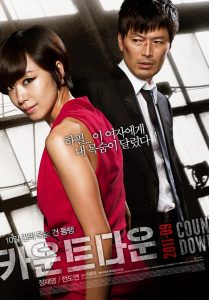 Tae Gun-Ho (Jung Jae-Young) is a cold-blooded debt collector, but he is also in debt himself. He goes back to his old apartment that is being demolished and discovers a cassette recorder that his deceased son played with. Gun-Ho doesn’t remember how his son died due to his memory suppressing a traumatic event.

On the day that Gun-Ho pays off his debts, he passes out in his car at a stop light. At the hospital he is diagnosed with liver cancer. Gun-Ho learns that he doesn’t have much time left to live. He needs to find a liver donor within the next 10 days. His son died five years ago and donated his organs to five other people. Gun-Ho contacts these five people to ask if they can donate a liver to him. Four of those persons refuse. There is one person left.

Cha Ha-Yeon (Jeon Do-Yeon) is in prison and she is the last person on Gun-Ho’s list. Gun-Ho makes a visit to prison and asks her to donate a liver. She says yes, but under one condition. Ha-Yeon will be released from prison in a few days and Gun-Ho must find a guy named Jo Myung-Suk (Lee Kyoung-Young) before then. Gun-Ho is able to fulfill his part of the deal.

On the day of her release, Gun-Ho is there waiting for her. While driving out of the prison parking lot they are ambushed by gangsters looking for Ha-Yeon. They barely escape after a mad car chase. When they stop at a highway rest stop, Gun-Ho goes to get Ha-Yeon medicine. In the meantime, Ha-Yeon jumps into driver’s seat and takes off.

Ha-Yeon heads to Busan to get back the money Jo Myung-Suk stole from her. Years ago, Jo Myung-Suk and Ha-Yeon ran a ponzi scheme. Jo Myung-Suk turned Ha-Yeon in to the police as the scapegoat. Meanwhile, Suwayi (Oh Man-Seok), a Korean-Chinese street gang leader, is in hot pursuit of Ha-Yeon for the money he lost to her in the ponzi scheme. Gun-Ho also heads to Busan to get Ha-Yeon to follow through on her deal before it’s too late him. The countdown begins …