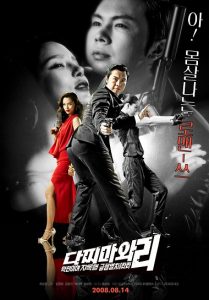 Under Japanese imperialism, Korean national treasure Golden Buddha is stolen. More important to national security, the statue contains vital information concerning Korean freedom fi ghters and their whereabouts as well as their true identities. Once in Japanese hands, the list could do insurmountable damage to not only the country but to the safety of its citizens.

The interim Korean government appoints legendary Korean spy Agent Dachimawa Lee to recover the fabled statue and reveal the dark plot behind the theft. To make matter worse, Agent Lee’s partner and lover was killed during a reconnaissance mission inside the enemy territory.

With an assortment of wacky gadgets and martial arts moves, Dachimawa Lee and his sexy new partner Mari attempt recovery operation in Manchurian compound but fails miserably, loosing not only the statue, but Mari’s life and Agent Lee’s memory. He is rescued by a peculiar girl living alone in the desert who helps him recover his memory and train with a new weapon.

Having defeated the Chinese and his companion Border Lynx, he discovers that the failure was an inside job and fueled by rage of revenge, he must face off with the shadowy fi gure behind the plot on the snowy fi eld of Switzerland where the statue is believed to be hidden.