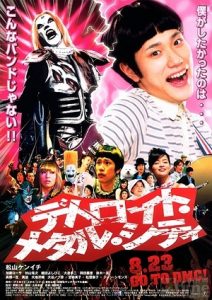 Soichiro Negishi (Kenichi Matsuyama) is a music obsessed young teen, making the jump from his rural hometown to the big city of Tokyo. His goal is to become a successful musician, but not your typical J-pop star. Soichiro Negishi has a love for indie twee pop. The kind of music popular in the trendier areas of Tokyo like Shibuya. Unfortunately for Soichiro Negishi he fails miserably in gaining any type of following for his music. Then one day he spots a flier for a music agency looking to recruit musicians. With his home-burned CD in hand, he enters the music agency’s office.

Fast forward a few more months and Soichiro Negishi is now the front man for an up-and-coming band. Unfortunately for Soichiro, the band is an ultra-heavy death metal band that sings about Satanism, rape, & murder. The band also parades around in make-up reminiscent of the heavy metal band KISS crossed with Ziggy Stardust era David Bowie. As you might guess, Soichiro is absolutely miserable performing this type of music, but his fear of his abusive female manager keeps him in the band. Meanwhile, Soichiro runs across old college sweatheart Yuri Aikawa (Rosa Kato). Yuri shares Soichiro’s love for twee pop and works for a hip magazine as a music columnist. Sochiro is too embarrassed to tell Yuri what type of music he now plays. Can Soichiro gain the affection of Yuri without Yuri discovering the truth behind his day time gig? Complicating matters even more, the infamous death metal artist known as Jack (Gene Simmons) is set to retire, but first sets out on a farewell world tour. Soichiro’s band “Death Metal City” then gets thrust into a death metal challenge with Jack for the adoration of all Japanese music fans.