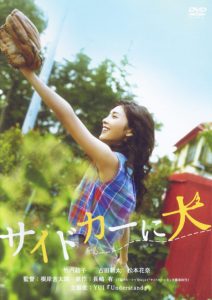 The film begins in the present, with its heroine, Kaoru (Mimura), a grown-up woman working as a real-estate agent, while helping out the folksy proprietor (Minori Terada) of a neighborhood fishing pond. There she meets a shy girl who needs her help baiting a hook and reminds her of herself in the fourth grade.

Next we see Kaoru (Matsumoto) as she was at that age, living with her obnoxious little brother (Takeru Taniyama), tense housewife Mom (Sawa Suzuki) and feckless Dad (Arata Furuta), who is trying to run a used-car business but getting nowhere fast. Then Mom walks out, apparently never to return. Soon after a strange woman (Takeuchi) shows up at the door, saying she has come to make dinner. Named Yoko, she is a walking, talking contraction to all the ideas of proper womanhood Kaoru has been taught. She greets the girl with a gruff, cheery “osss,” (the kind of greeting a sumo wrestler would give), slouches in a chair like a teenage boy, snaps her cigarette lighter like a gangster and dumps Kaoru’s favorite snack — chocolate-covered wheat puffs — into a hastily rinsed-out curry bowl, like a keeper feeding an animal at the zoo. (She even calls the snack esa, which means “feed.”) Has this woman no couth manners.

But she is, Kaoru soon realizes, a friendly, open type, with none of the usual grown-up airs of superiority. When Yoko invites her shopping, Kaoru goes along, despite her trepidation — as well as embarrassment when she sees Yoko mount her sleek green racing bike, with its drop handlebars. Kaoru can’t tell her that, at the advanced age of 10, she still can’t ride her own bike, which is quietly rusting under the stairs.