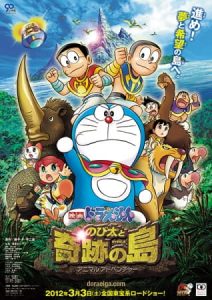 Nobita and his dad buy a big rhinoceros beetle, which he promises to his dad to take good care of it. Later, Doraemon’s group finds a strange island where a tribe co-exists with prehistoric creatures long believed to extinct yet preserved by a mythical beetle spirit named Golden Hercules. However, the group has to deal with a group of criminals from the future who intend to capture Golden Hercules for a profit.