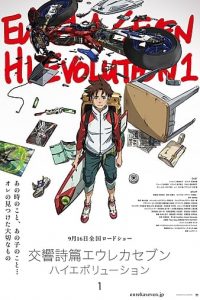 It all begins with the story that was left untold—the earth-shattering incident where Renton’s father disappeared. With the mysterious pilot Eureka by his side, only Adroc Thurston could undo his own mistake, sparking the event that changed everything and earned him the title of a hero. Now, ten years later, Eureka lies in critical condition as Renton leaves the crew of the Gekko. But when he finds himself in the care of his father’s old friends, he has a choice to make. Either stay with the loving family he’s always wanted, or earn the love he seeks.