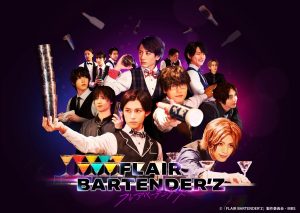 The four main characters grew up in different environments. They meet “competitive bartending” and with their own thoughts and feelings, they try to win the Flare competition. They aim to win the Flair competition with their own feelings… In order to learn more about his father, who left home when he was a child, Elito Kurosawa decides to start working at his father’s favorite bar. Touya Natsume,who was desperate because everything he did was not going well.Seiichiro, who was forced to abandon the competition one year ago before the Flare finals, just one step away from winning. And Arata, last year’s Flare champion and unbeatable. The fates of these four men intersect through “Flare”-the story of overcoming their “past” and aiming to win the Flare Japan Cup with their friends. What is the reason why they have to “win”?