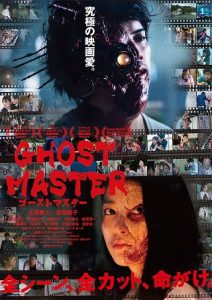 Kurosawa Akira, assistant director at a film studio, is a weak film nerd who loves class B horror because he is the type that can’t deny when asked. At the scene of Kurosawa’s current youthful romance film “Kabedon”, he lives his days bullied by the director and staff. He always carries the script of “Ghost Master,” which he has been writing and dreamed of filming when he become a director. However, Kurosawa’s discontent and grudge-like love for “Ghost Master,” which is filled with so many harsh scenes, summons a demon, who turns the filming scene into a terrible hellish place.