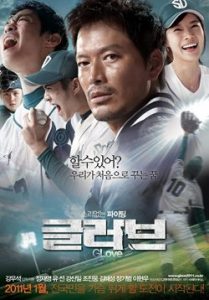 “G-Love” centers around a has-been professioanl baseball player (Jung Jae-Young), a female school teacher (played by Yu-seon), and a group of deaf high school baseball players. Friendship & love are explored in the film, set within a countryside backdrop.

Fading star baseball player Sang-Nam (Jung Jae-Young) finds his name more in the media these days for his boorish behavior. The latest of which involves Sang-Nam involved in a drunken brawl and swinging a baseball bat. His agent Charles (Jo Jin-Ung) then advises Sang-Nam to take a job coaching a team of hearing-impaired players at a rural school to help rebuild his image.

Sang-Nam arrives at the school with the boys welcoming him with open arms, but Sang-Nam is less than enthusiastic about his new gig. The boys have never won a game, there’s only 10 players (with 1 available pitcher) and Sang-Nam is clueless on how to coach a team who can’t hear. There’s also Ms. Na (Yoo-Sun) who works as the music teacher and baseball manager. She’s ultra protective of the boys and chastises Sang-Nam for his condescending attitude. Sang-Nam already wondering when he can go back to the pro league is counting his days until he can go back to the LG Twins. Then something happens.

Sang-Nam and the kids start to form a genuine bond. Soon enough, Sang-Nam finds himself energized by the kids purity and starts to put out sincere effort in preparing the team for the nationals.