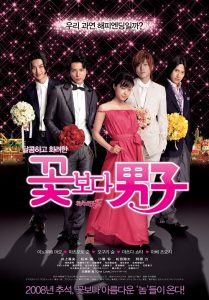 Based on the popular Japanese comic of the same name about an average girl’s high flying romance and friendship with F4 or four handsome heirs. High school sweethearts Tsukasa and Tsukusi are finally getting married. Tsukasa gives his fiancee a precious family heirloom ― but only to see a robber disappear with it. Tsukasa and three other F4 friends reunite for the globetrotting search.