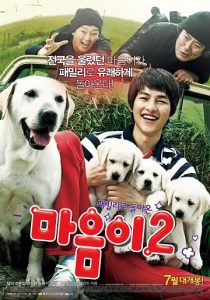 When loveable Labrador Maeumee has a set of puppies, Dong-Wook’s (Song Jong-Ki ) grades start to suffer. Because of this, Dong-Wook’s mother decides to get rid of Maeumee and the puppies. The dogs then stay at a relative’s video shop until the animals can be placed into an animal training center. Meanwhile, two unscrupulous jewel thieves come into the video store and spots the little puppies. Hyeok-Pil (Song Dong-Il) decides to steal the littlest puppy to use as a runner to transport diamonds. Maeumee spots the two men taking away her young puppy and goes after the thieves! Can Maeumee save her puppy? Will Dong-Wook ever get to see Maeumee and the puppies again?