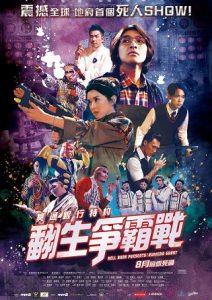 Wong Hui Kwai has been dead for 22 days. Unusually, he can’t remember how he died, and as he tells the lady at Labour Department of Hell when asked what he achieved while alive was known chiefly for his ability to install internet cables with maximum efficiency (unfortunately Hell is already fully covered for wi-fi). Sadly, Hui Kwai didn’t do anything of note in his life and now it’s over he’d really rather just take it easy, which is why when he’s offered a nice job he tries to back out towards fiery torture. Nevertheless he finds himself a sudden replacement for a contestant who ascended at an extremely inconvenient moment right before he was supposed to take to the stage on Hell’s hottest variety show Hell Bank Presents: Running Ghost in which the prize is instant resurrection. Hui Kwai needs to succeed in three rounds of ghostly pranks, making the living faint, possessing a living person, and then scaring someone to death.