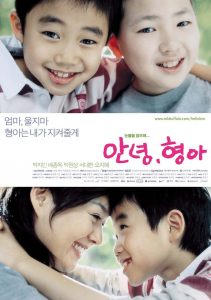 The film is based on a true story.Based on true story, “Little Brother” marks the debut feature of Korean director Lim Tae Yong and is another in the ever popular family melodrama genre. This time around the film focuses on the familiar subject of life threatening illness, as a twelve year old boy called Han Byeol (Seo Dae Han) is hospitalized with a brain tumor, leaving his aggressive and mischievous younger brother Han Yi (talented young actor Park Ji Bin, also in “A Family”) to try and cope in his absence. With his parents (played by Bae Jong Ok and Park Won Sang) all but ignoring him, the poor lad makes his best efforts to get their attention, while slowly coming to terms with the sad situation.