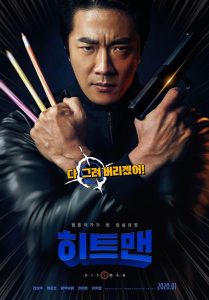 Joon (Kwon Sang-Woo) was once a legendary hit man agent for the Anti-Terror Team in the NIS. His true passion was for writing & drawing comics. To pursue his dream, Joon decides to fake his death during a mission for the NIS.

15 years later, Joon is now married to Mi-Na (Hwang Woo Seul Hye) and has a daughter (Lee Ji-Won). He writes webcomics full-time, but his comics are not very popular. It gets so bad, that his current webcomic is cancelled due to negative reviews. Joon becomes furious. That evening, he drinks excessively and thinks about his daughter’s advice to write a story about his own life. While under the heavy influence of alcohol, Joon draws a comic about his past life as a hitman for the NIS. The next morning, with his head pounding from a hangover, Joon realizes that the comic he drew last night was posted online. The comic contains sensitive classified material and Joon is in a whole lot of trouble.