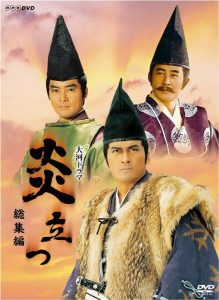 Synopsis:
This Taiga Drama based on the novel (written for TV) by Katsuhiko Takahashi. Homura Tatsu (roughly means On Fire) tells the story of the Oushu Fujiwara clan spanning generations, 140 years in the late Heian era. They established their domain in Touhoku area (North-east area of Japan), independent from the rule of Minamoto clan.