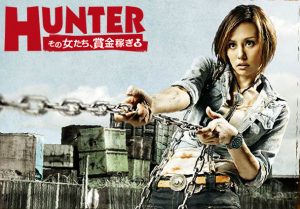 Rei Isaka (Ryoko Yonekura) used to work as a flight attendant, but because of her bold personality and strong sense of justice, she didn’t have a boyfriend and was fired from her job. Rei then becomes a bounty hunter, earning money from cash rewards place by the government on unsolved cases. Rei forms a team for her new job with a junior flight attendant and a housewife.

Her path to working as a bounty hunter began when a thief attempted to pick pocket someone at the airport. Rei caught the thief with fellow flight attendant Jun Motomura (Mirei Kiritani). Rei then received a 1 million yen prize, because the thief was a wanted criminal. Rei’s younger sister Akane Isaka (Sayaka Yamaguchi) then borrowed 5 million yen from her and then disappeared with the money.

Rei goes to the restaurant Akinai which her younger sister Akane runs. Akane’s daughter Haru, who is in the 5th grade of elementary school, doesn’t appear worried over her mom’s disappearance. Rei then goes to the police station, but Detective Takeshi Gondo (Shosuke Tanihara) seems indifferent to her case. Meanwhile, Rei is pressured by her boss to retire. Because of this, Rei retires as flight attendant. Rei pays off her younger sister debts with her own severance pay.

Rei begins to look for her sister in earnest with the help of her friend Jun Motomura. She discovers that her younger sister recently talked with a man who was a frequent customer at her sister’s restaurant. Rei and Jun are then shocked to learn that man’s picture is posted at the police station for wanted criminals. He is suspected of killing a woman and dumping her body. Rei and Jun desperately explain the case to Detective Takeshi Gondo, but he doesn’t pay attention to them.