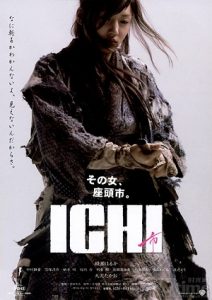 Ichi (Haruka Ayase) is a blind entertainer that travels the countryside with her traditional Japanese guitar and walking stick. She’s in search for the kind man that brought her up as a child, but because of her beauty she encounters problems every step of the way. Fortunately for Ichi, she is also a gifted swordswoman and carries a lethal blade within her walking stick.

One day, members of the notorious Ban-ki gang surround Ichi and prepare to rape her. A passerby then comes to defense of Ichi. The man’s name is Toma Fujihira (Takao Osawa) and although he seems terrified of the men, he still attempts to stand up for the seemingly defenseless blind woman. Once the Ban-ki members draw their swords on Toma Fujihira, Ichi now comes to the defense of the shaking man. After unleashing her blade, she methodically kills all of her attackers.

Ichi and Toma Fujihara then travel the countryside together developing a friendship that hints at romantic interests between the pair. When the couple arrive in the next town they are then confronted by other Ban-ki gang members who attempt to exact revenge on Ichi.