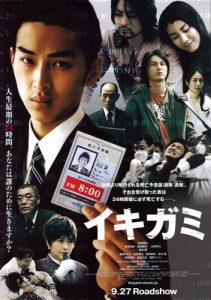 A place, somewhere, that bears a strong resemblance in history and environment to Japan. Its return to prosperity after defeat in war is due to a certain law, a pillar of the state. This is the Special Law for the Maintenance of National Prosperity. 24 hours before this capsule is to bring about death, an official of the Ministry of Health and Welfare brings a letter announcing impending death, an ikigami. Those who receive this ikigami letter have 24 hours of absolute freedom to do anything and everything they want. Kengo Fujimoto has made his way through university and taken a job with the Ministry. His work now is delivering these ikigami letters.

Dear Citizen: Thank you for your loyalty. You’ve no doubt noticed that the world is a troubled place. People are apathetic, lazy, unmotivated. You’ve probably asked yourself

WHY ISN”T ANYTHING BEING DONE TO STOP THIS SYSTEMATIC DECLINE?

Rest assured that measures are being taken. Beginning immediately, we will randomly select a different citizen each who will be killed within 24 hours of notification. We believe this will help remind all people how precious life is and how important it is to be a productive, active member of society.

Thank you for your continued attention and your cooperation and participation…