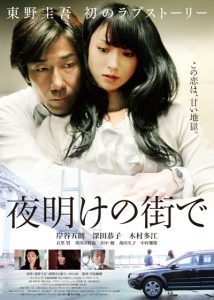 By chance, Watabe (Goro Kishitani) meets subordinate worker Nakanishi (Kyoko Fukada) at a batting center. A friendship occurs which leads to a heated love affair. Watabe then learns that Nakanishi is the prime suspect of a murder case that occurred 15 years – the murder of her father’s ex-lover. The statue of limitations for that murder case is soon to expire ..