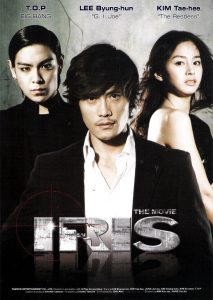 Korea, the last divided nation on earth, is constantly under political and military tension with the surrounding countries especially with the North Korean nuclear issue. To avoid the second Korean War, the secret service agency NSS exists for the national security on the Korean peninsula.

NSS special agents are trained specialists who would use any means to fulfill their mission. They officially do not exist and are not acknowledged or protected by the government. Although they are trained to be cold-blooded killers, there is one taboo they cannot avoid; that is love.

Hyeon-jun (Lee Byung-Hun) and Sa-woo (Jeong Jun-Ho) are close friends and rivals in the 707 special forces. They are both recruited into NSS and quickly become the best of the best. Each with different secret assignments, they soon have to take on different paths of life, and even against each other. In a world of conspiracy and betrayal, they both fall for Seung-hee (Kim Tae-Hee), the beautiful but lethal profiling specialist at NSS. They are forced to make their final decision when they are faced against each other in a nuclear terrorist attack, and Seunghee’s formidable secret is revealed.