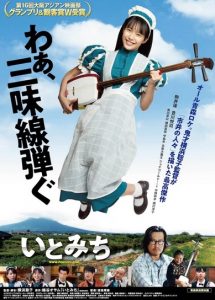 SOMA Ito (KOMAI Ren) is a high school student in Hirosaki City, Aomori. Her hobby is playing the Tsugaru shamisen, a three-string instrument that is popular in her home prefecture. She picked up the skill from her late mother, a talented shamisen player in her own right. While Ito can express herself through music, talking is a little harder due to shyness, which, when coupled with her strong Tsuguru dialect, makes it hard for her to communicate. And so she has few friends but, despite this, she has a strong inner spirit and she makes a big decision to start a part-time job at a maid cafe, much to the concern of her father Koichi (TOYOKAWA Etsushi). With every meeting that Ito has, her confidence begins to grow.