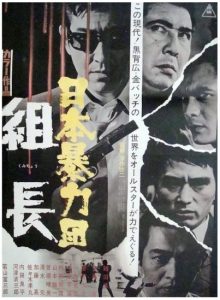 Coming out of jail and hoping for a quiet life, Yokohama yakuza has to take the lead of his gang after the death of his boss. His small group is is taken in a crossfire between a big yakuza group from Osaka at war with the Tokyo alliance for the control of the city. He tries to keep to the old yakuza code but he is no match for the new thugs who live and fight without honor.