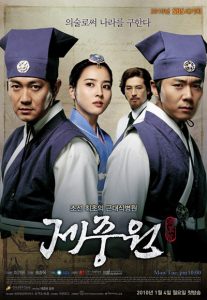 Hwang Jeong, whose father was a butcher (the lowest social position in South Korea), works his way up to become one of the premier doctors during Korea’s Joseon Dynasty. He then starts working at “Jejungwon” – the first modern hospital to practice western medicine in South Korea.