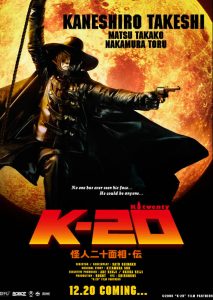 Story takes place in the 1940’s, in a fictional Japan, where the country is dominated by the upper class and the country suffers from a huge income disparity between the rich and poor. During this time, an evil masked villain named “K-20” roams around Japan stealing priceless artifacts. Always on the trail of K-20 is his arch nemesis Akechi (Toru Nakamura) – a suave detective. When Akechi announces his engagement to the rich heiress Yoko Hashiba (Takako Matsu), K-20 warns Akechi to call off the wedding or he’ll be there to make his biggest heist yet.

Meanwhile a good natured circus performer named Keikichi Endo (Takeshi Kaneshiro) is hired by a mysterious figure to snap photos of Akechi and Yoko’s wedding. Keikichi is unaware that his employer is in fact the evil K-20 and he’s being set up to be his fall guy …