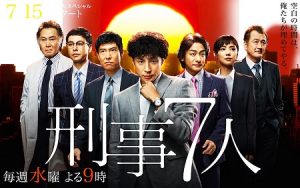 Yu (Noriyuki Higashiyama) worked at the lost and found center of The Tokyo Metropolitan Police Department. He is then assigned to the #12 section of the 1st investigation division. The team is known as a grave for detectives and they are filled with expelled detectives. The actual members though are excellent detectives. They have conflicts with each other, but cooperate and solve difficult cases.