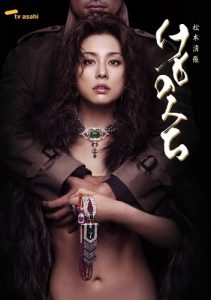 The life of Tamiko (Yonekura) was miserable, as she had to give up her dream to become a jewelry designer and work for a Japanese style hotel “Hosenkaku” simply to support her physically handicapped husband. One day, Tamiko was approached by a mysterious gentleman Kotaki (Sato) who offers her a unique proposal, “would you be interested in riding a vehicle without a destination?” His words shook Tamiko’s desperate soul wanting for a drastic change in her life. In order to free herself from the depressing reality, she cleverly kills her husband by setting her house on fire. Then, through Kotaki’s introduction, she becomes acquainted with Kito, a political fixer, and decides to become Kito’s mistress. Although she notices that her decision may not be right, she decides to follow her instincts and go for the “animal trail”…. –TV Asahi