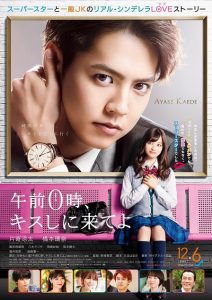 Hinana (Kanna Hashimoto) is a sincere high school student with good grades. She appears to be uninterested in romance, but she actually dreams of having romance with a handsome man. One day, top star Kaede (Ryota Katayose) comes to Hinana’s high school to shoot a film. She notices that Kaede stares at the female students’ butts. While Hinana takes part in the filming, she becomes attracted to Kaede who shows a natural and tender side. Kaede also becomes attracted to her due to her sincere and honest personality.

Meanwhile, Akira (Gordon Maeda) is Hinana’s childhood friend and he holds feeling for her. Akira declares to Kaede that he likes Hinana.