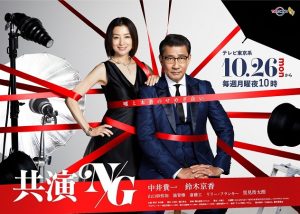 Toyama Eiji became popular and his star was on the rise in his mid-20s. Back in the day, he played the lead in the hit drama Deeper than Love. His passionate romance with his co-star Ozono Hitomi made waves but he was discovered to be two-timing her and they broke up. He was iced out of the industry for three years as a result of a press conference that Hitomi held. It has been an open secret that the two of them will not act together. However 25 years after they split up, Toyama, who is now an A-lister, and Hitomi, who continues to top the rankings as the female actress that people want as their boss, find themselves co-stars of a major drama titled Love You to Death that TV Toyo is staking its fortunes on. Will the two of them be able to put aside their years of resentment and deliver performances in tune with each other?