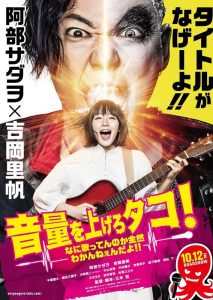 Shing (Sadao Abe) is a rock star. He has an amazingly loud voice with a range of four octaves. His secret is that he has created his voice through a method of vocal cord doping. His voice is now teetering on the edge, due to side effects from the vocal cord doping. Around this time, Shing meets Fuuka (Riho Yoshioka) who is a street musician. When Fuuka sings, her vice is so small. Due to Fuuka, Shing looks back upon his past.