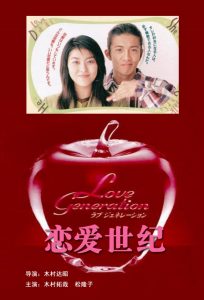 Love Generation, as the title suggests, revolves around the relationship of the two leading protagonists, Katagiri Teppei and Uesugi Riko, who begin their relationship as squabbling colleagues before falling in love. Katagiri Teppei is a talented designer and very popular among women. Unfortunately, Teppei, who despises conformity, is forced to move to the sales department for his egocentric behavior. Throughout the series, he is forced to adapt to the new working environment, which includes cutting his precious locks of hair to create a neater and more professional image. As he struggles to adapt, he meets Uesugi Riko. While she does not like him at first, she eventually falls for him. However, Teppei runs into his high school sweetheart Mizuhara Sanae, and discovers that his ex-girlfriend is now engaged to his brother Soichiro. Fortunately, Riko is there to console him, and this eventually blooms into a romance. Not long after, however, Sanae realizes she still has feelings for Teppei, and thus creates a love triangle. To make the matter even more complicated, Soichiro starts to have an affair with his past girlfriend.