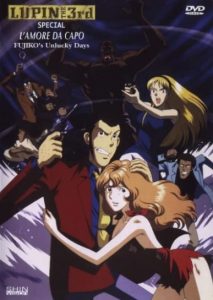 It was a pleasant evening dinner for Fujiko and Lupin. Right until their moment together was interrupted by a series of missiles from a helicopter. The pilot is named Nazaldorf, who wants the “Columbus Files” that they have. Unfortunately the files were destroyed and Fujiko is the only one who’s memorized it. Lupin got separated with Fujiko, who fell off a cliff and eventually being hunted down by Nazaldorf’s men. Meanwhile at the Meditarrean Sea, lived a woman named Rosaria, who is a treasure hunter. Finds Fujiko in her own home. Fujiko is frighten from being hunted down by Nazaldorf’s men. Not only that, but her memory is missing and doesn’t remember who she is or Lupin. This will be tough for Lupin, as Fujiko is the only link in finding the Columbus Egg. Will Fujiko regain her memory, and who is this Nazaldorf?