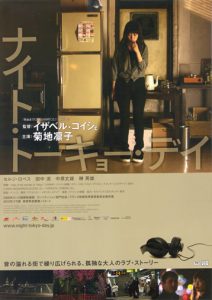 Ryu (Rinko Kikuchi) is a loner who at night works at a fish market and occasionally is a contract killer. David (Sergi Lopez) is a wine-store owner devastated by his girlfriend’s suicide. When Ryu is hired to bump him off, the pair develop a tentative, enigmatic relationship.