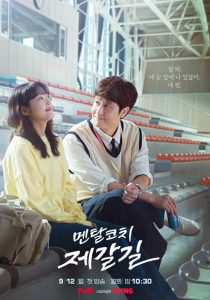 Jegal Gil (Jung Woo) was a member of the national taekwondo team, but he caused an unprecedented trouble that led to his ban from the team. Now, Jegal Gil enters the athlete’s village for the national team as a a mental coach. He begins to work with the athletes, including Cha Ga-Eul (Lee Yoo-Mi). Cha Ga-Eul is a short-track speed skater. She won a gold medal at the world championships, but she is currently mired in a slump. She rarely shows her emotions to others.

Meanwhile, Jegal Gil is hostile to Ku Tae-Man (Kwon Yool), who is the director of the human rights center of the athletic association. Ku Tae-Man was also a member of the national taekwondo team and he is the one who changed Jegal Gil’s life. Ku Tae-Man is highly competitive and prioritizes results over anything else. Park Seung-Ha (Park Se-Young) is a counselor at the athlete’s village and she works with Jegal Gil.