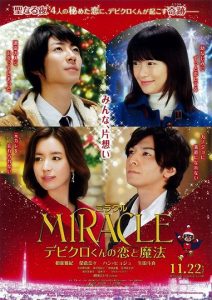 Hikari (Masaki Aiba) works at a book store. He is a kind person, but his kindness often makes him look pathetic. Hikari hopes to become a manga writer. At night he spreads mysterious flyers “Debikuro Communication”. One day, he meets someone via fate.

Anna (Nana Eikura) has been Hikari’s friend since they were children. So-Young (Han Hyo-Joo), who is a world famous lighting designer, happens to know Hikari. Kitayama (Toma Ikuta) graduated from the same university as Hikari. Kitayama is also a popular manga writer.

The love lives of these four people makes a miracle at Christmas night.