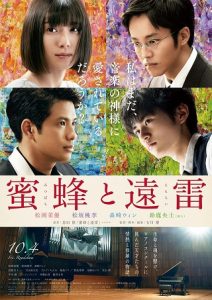 Akashi Takashima (Tori Matsuzaka) graduated from a music university, but he now works at a musical instrument store. He enrolls in the international piano competition as a last challenge due to his age.

Masaru C Revy Anatoru (Win Morisaki) attends the Juilliard School. He is favored to win the preliminary round. 16-year-old Jin Kazama (Oji Suzuka) is unknown and appears in the competition. He has a recommendation letter from a late pianist who was recognized as the best in the world.