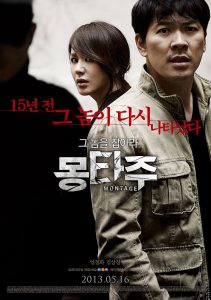 Nearly 15 years ago, Ha-Kyung’s (Uhm Jung-Hwa) daughter is kidnapped. Detective Chung-Ho (Kim Sang-Kyung) works obsessively on the case, but his efforts go in vain. Ha-Kyung’s daughter is found dead and the kidnapper slips away without a trace.

Now, with only five days left before the statue of limitations applies on the murder case, Detective Chung-Ho goes back to the scene of the crime and discovers a white flower left there. Only the kidnapper, the police and Ha Kyung are aware where the murder took place. Detective Chung-Ho again works frantically to find the killer before time runs out on the case.

Grandfather Han-Chul (Song Young-Chang) leaves his granddaughter out in her apartment’s playground while he goes inside to answer the phone. Han-Chul quickly discovers that his granddaughter has been kidnapped. The police later notice similarities between this kidnapping and the abduction of Ha Kyung’s daughter 15 years earlier. Detective Chung-Ho is drawn into the new abduction case, while Ha Kyung works in the background to find her daughter’s killer.