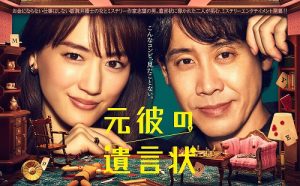 Reiko Kenmochi (Haruka Ayase) works as a successful lawyer at a big law firm. She is ambitious and she is also honest about her desire to make a lot of money. One day, due to a bonus cut issue, Reiko Kenmochi becomes upset and takes a leave from her job. During her break, she spends time sending emails to people she knows, including her ex-boyfriend Eiji Morikawa. She then receives an email from a mysterious person, Shinoda. That email states that her ex-boyfriend Eiji Morikawa died. She is also surprised to learn that his will states that his entire fortune will be handed over to the person who killed him. Reiko Kenmochi devises a plan to split her ex-boyfriend’s fortune with Shinoda, turning Shinoda into Eiji Morikawa’s killer.