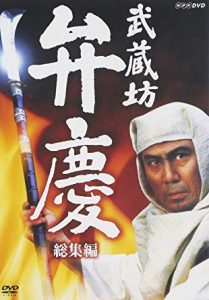 Synopsis:
After being carried in his mother’s womb for three years, Benkei is born with long hair and teeth and the body of a small child. It is said that he immediately laughed and commented on the brightness of the outside world, leading local people in his native Kii (modern Wakayama) to proclaim that he is a devil. Abandoned on a mountainside, he is adopted by Dainagon, a Kyoto resident who rears him until age seven when he leaves to become a monk. Thrown out of the monastery for his violent behavior, Benkei wanders Japan in search of enlightenment, though only trouble seems to find him. After accidentally causing a temple to burn down, he decides to begin a quest to defeat 1,000 of the hated Heike samurai in battle and donate their swords to a temple. Obtaining the first 999 swords proves relatively easy but the final weapon belongs to Yoshitsune, a young boy whose appearance belies his great skill as a warrior. After a prolonged battle, Benkei admits defeat and swears allegiance to Yoshitsune, becoming his loyal companion. A colorful supporting character in other adaptations, here he takes center stage in a drama.