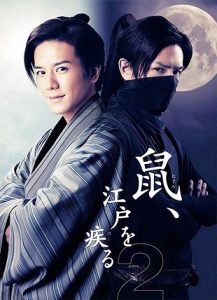 It is the Bunka-Bunsei period. While the culture of the townspeople matures and flourishes, administration by the close advisers of the 11th Tokugawa shogun Ienari is rampant and characterized by a debasement of public morals in Edo. Discontent with the samurai families and local businessmen grows because the lives of the ordinary people who live in the town are getting harder and harder. All of a sudden, a whistle sounds in the dead of the night. The chivalrous thief is known as Nezumi Kozo easily escapes along the roofs with a box of 1,000 ryo and scatters the money over a shabby tenement house that is asleep. The true identity of this thief is that of the playboy called Jirokichi. Although he is nothing more than a mere thief, he is obsessed about justice and would poke his nose in cases where he will not even get a penny. This is because he loves seeing the happiness of the people living in Edo.