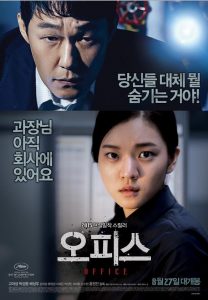 Kim Byeong-Gook (Bae Sung-Woo) works as a section chief at a company. He is a family man and reliable with at his job, but, one day, he kills his entire family and disappears. Detective Jong-Hoon (Park Sung-Woong) investigates the murder case and talks with his Kim Byeong-Gook’s co-workers at his office. His colleagues though are not very forthcoming with details. Besides, Lee Mi-Rye (Ko Ah-Sung), who was very close with Kim Byeong-Gook, they seem to be hiding something. Detective Jong-Hoon checks the CCTV system and observes Kim Byeong-Gook returning to work after the murders, but he can’t locate when he left the office.

Meanwhile, the co-workers at the office become shaken with anxiety over Kim Byeong-Gook’s whereabouts.